Prof. Nicky Clayton’s chosen extract taken from ‘The Moustachio Quartet~ Count Zapik’, by Clive Wilkins, which she read during her BBC Radio ‘Private Passions’ programme, is set out below. There are three books in the quartet currently in print, available from Amazon. The last book in the series is still being written and will be published in 2016.

The books explore the subjective experience of thinking amidst the miasma of being, examining the experiences of four protagonists who pass through the mythical city of Warcapest. The works provide text extracts for the lecture series ‘The Captured Thought’ which Nicky and Clive have undertaken in the UK, in Europe and in the U.S.A.

The links at the end of this entry will take you directly to the Amazon site for purchase. 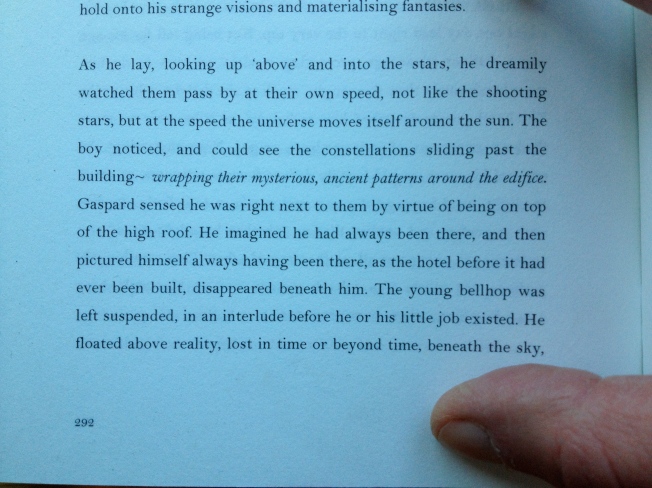 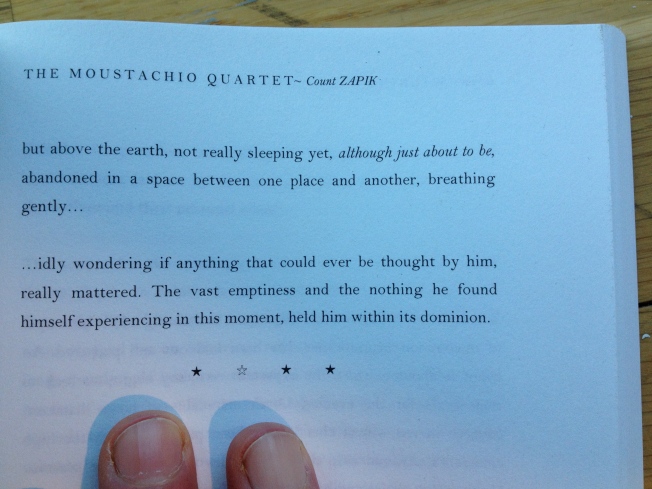 ‘As he lay, looking up ‘above’ and into the stars, he dreamily watched them pass by at their own speed, not like the shooting stars, but at the speed the universe moves itself around the sun. The boy noticed, and could see the constellations sliding past the building~ wrapping their mysterious, ancient patterns around the edifice. Gaspard sensed he was right next to them by virtue of being on top of the high roof. He imagined he had always been there, and then pictured himself always having been there, as the hotel before it had ever been built, disappeared beneath him. The young bellhop was left suspended, in an interlude before he or his little job existed. He floated above reality, lost in time or beyond time, beneath the sky, but above the earth, not really sleeping yet, although just about to be, abandoned in a space between one place and another, breathing gently…

…idly wondering if anything that could ever be thought by him, really mattered. The vast emptiness and the nothing he found himself experiencing in this moment, held him within its dominion.’